Connectwise Automate is a powerful tool. By default, it gathers a large amount of information about your agents. This information is great for creating scripts and searches for automation. You may find, however, that information isn’t complete. For your business needs, there may be some information that CWA doesn’t automatically generate. Perhaps you want to make a note on every client, or pull some additional information from workstations. EDFs are there for you.

I’m a fan of starting off with examples.

Let’s say you have rather long client names, but would like to have a place to add the client’s short name for scripting or just basic information storage. For that, you can create a Client Level EDF

Perhaps you have script to install a piece of software, but your darn techs keep installing it to machines they shouldn’t. You can create a checkbox EDF on a workstation level, and then modify the script to check for the EDF before installing, and exiting if it found it checked.

You could also do the opposite. Use a checkbox EDF on the client level to mark a client for deploy of software, then use a search to find all workstations of clients that have that checkbox checked. Then create a group populated by that group, and add a scheduled script to deploy the software.

This one is one of my favorites. Storing the BitLocker recovery key for Windows workstations. CWA doesn’t pull this by default, but it is trivially easy to pull it with powershell, and stash it in an EDF for safe keeping. It’s saved my client’s bacon more than once.

There isn’t actually a lot to do when making them. It’s pretty simple and self explanatory. Let’s start by going to Setup>Dashboard then the tabs Config>Configurations>Additional Fields. 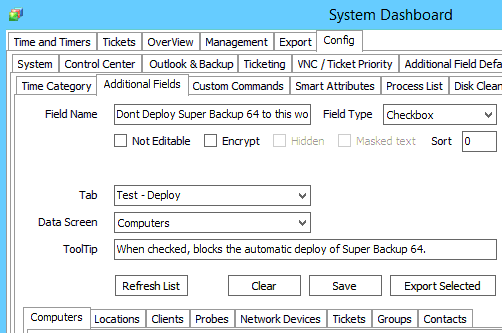 So what do we see? Lots of things. Field Name is pretty obvious, it’s the name of the EDF, this will be the label on the field when we check it in the Client, Location, or Computer screen. Field type is the type of EDF it is. A checkbox really means “0 or 1”.

Non Editable will prevent techs from editing the value, they can only view it. Encrypt will store the data encrypted so it doesn’t sit in the database in plaintext. Sort will help you control the order the EDFs show up in. Lower numbers come first.

Tab is just that, which tab it shows up in when viewing it. You can choose from the drop down, or write in a new one. I recommend making new tabs with shorthand for your company name in to so you can find it easily.

Data Screen decides where the EDF is shown. If set to Clients, for example, it will be a shared EDF for everything inside of a client. Viewable only from the client screen.

This is a little weird. For some reason, rather than putting the default setting with initial creation, they are in another tab, one tier higher than the actual creation. It’s under Config>Additional Field Defaults. Don’t ask me why. Maybe one day they will new interface the whole Dashboard and get rid of all that craziness (in favor of a new craziness).